A White Elephant Gift Exchange is a popular Christmas event where people vie to walk away with the best present. It also goes by Yankee Swap, Dirty Santa, and a plethora of other names. The White Elephant game is played by a lot of different rulesets – some dead simple and others confusingly elaborate. Here are the basic rules…

1. Each player brings one wrapped gift to contribute to a common pool

The gift exchange organizer should provide information on what type of gift people should bring.

2. Players draw numbers to determine what order they will go in

Alternatively, someone can draw names from a hat, or the order can be set by the organizer prior to the event.

3. Players sit in a circle or line where they can see the gift pile

To make things easier, everyone should sit in the order in which they will take their turns.

4. The first player selects a gift from the pool and opens it

Make sure everyone can see the gift!

5. The following players can choose to either pick an unwrapped gift from the pool or steal a previous player’s gift. Anyone who gets their gift stolen in this way can do the same – choose a new gift or steal from someone else.

To keep things moving along, there are a couple of limits on gift swapping:

6. After all players have had a turn, the first player gets a chance to swap the gift he or she is holding for any other opened gift. Anyone whose gift is stolen may steal from someone else (as long as that person hasn’t been stolen from yet). When someone declines to steal a gift, the game comes to an end.

Note that for this last “extra” turn, the three-swap rule doesn’t apply. Players can keep swapping until someone decides to stand pat, or there are no other eligible people to steal from.

While the above rules are as close to the “vanilla” version of the game as you can get, there’s really no right or wrong way to play. Over the years, many new ideas have been incorporated into the gift swap game, with the aim of keeping the game moving and/or making it more strategic. Here are some rules tweaks many people use:

Three Swaps and You’re Out. If you get stolen from three times during the game, you are out of the game and can no longer be stolen from.

Three Swaps and the Gift is Out. If a present gets stolen three times, it’s out of the game and the person who holds it gets to walk away with it.

No Extra Turn/No Extra Swapping. Some people don’t allow the first player to swap at the end. Or, if they do, the first person simply gets to swap once with no additional swapping allowed.

Poem/Story. Instead of following the same set of rules each turn, players follow instructions given to them through a Christmas-themed poem or story. One type of White Elephant story tells players to pass their gift left or right until the end, when they get to keep whatever item they’re holding.

Gift Themes. The organizer may require people to bring a gift that fits a certain theme. The most common one is a re-gift (i.e., an unwanted item that people have lying around the house). However, the theme could be anything – ornaments, coffee table books, candy, do-it-yourself crafts, etc.

There are lots of different approaches to buying a White Elephant Gift. As long as you’re following the price suggestion (typically around $20) and any “special” instructions by the organizer, you can’t really go wrong. That said, here are some characteristics to look for when looking for a gift to bring to your White Elephant Gift Exchange party:

Funny. Funny gifts make the biggest splash at the party, but aren’t always the most desirable items for swapping.

Weird. Weird artwork and gadgets are also popular at Christmas gift swaps, and are often highly sought after.

Nice. There’s nothing wrong with buying a genuinely nice gift, especially since it has the potential to fuel a lot of competition during the game.

In short, there’s a place for all sorts of different items in a gift exchange. But if there’s one quality that all gifts should have, it’s that they should be interesting. For more ideas, check out my list of great White Elephant gifts. 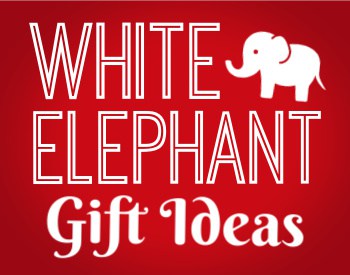 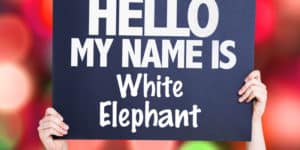 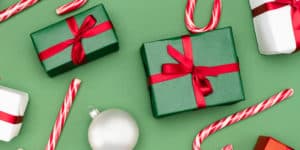